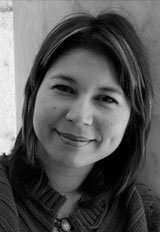 Cristina explores in her fiction the themes of migration, travelling, self perception, non communication, cross/cultural dynamics, and what she calls metafiction, as well as women and their personals limitations. She situates her stories in the desert of the Sonora/Arizona border, where she grew up, as well as countries like Austria, Brazil, China and Japan, where she has lived. It is from these geographies, literatures and linguistics that she portrays her characters, her prose and her poetry.
She has published the following short story books: Puede que un sahuaro seas tú (Perhaps one sahuaro is you, 2010), Hanami (To see the flowers bloom, 2009), El agua está helada (The water is cold, 2006), and Cuentráficos (Storytraffics, 2006).
As a Japanese poetry translator, she has released the books Sin conocer el mundo (Without knowing the world, 2007) and Dos mil millones de años luz de soledad (Two billion light years of solitude, 2012) from the author Shuntarō Tanikawa. She has translated poems by Mitsuo Aida, Ishigakirin and Tawara Machi for Hispanic media as well as poetry from French, Portuguese and English into Spanish.
Cristina has received the Latin American Short Story Award “Benemérito de América”, the Northwestern Literature Prize and the Sonora State Short Story Award, among other prizes both at national and international level for the genres of narrative and poetry. She has been invited as an international writer in residence by the Government of Québec, the Canada Council for the Arts, the Shanghai Writers Association, the Sacatar Foundation in Salvador de Bahía, Brazil and the Writer´s Lab on the Border at Tijuana/San Diego. She has received several artistic scholarships to support her fiction writing, residences and poetry translation from the National Fund for Culture and Arts in Mexico (FONCA) and the Sonora State Fund for Arts (FECAS).
As an economist, Cristina has published the non-fiction book Para entender la economía del arte/To understand the economics of the arts (2009), and publications regarding the impact of cultural festivals and analysis of cultural markets (Cajeme 2020, México), the impact of nuclear energy resources distribution for Latin America (OIEA, Austria) and the impact of microcredit banking for women (Grameen of the border, México).
Cristina holds a Master Degree in Public Policy from Osaka University and graduated from the Asian Studies Program at the Kansai Foreign Studies University, both in Japan. She previously obtained a BA in Economics at the Technological Institute of Superior Studies in Monterrey (ITESM), Mexico. Cristina has been a consultant for NGOs and for the United Nations in Vienna, Austria. At her hometown, she created and coordinated the First Bilingual Literary Contest Jiosiata Nooki (Yaqui-Spanish), integrating contemporary first nation writers and proposing a development project based in creativity and cultural diversity.
Her fiction, essays, poetry and haiku have been translated for publications, readings and anthologies in Austria, Brazil, Canada, China, India, Japan, Mexico, Peru and the United States. She teaches creative writing and Japanese literature in Mexico and other countries. Cristina was recently appointed to be a member of the National System of Artistic Creators in Mexico (SNCA/FONCA/CONACULTA), a national distinction for which she is one of the youngest to be selected in her discipline.